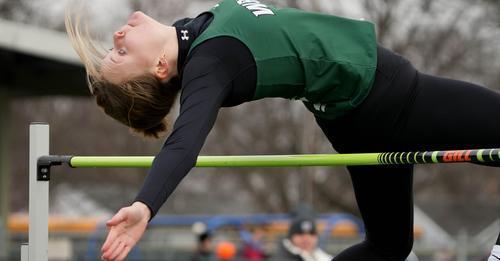 Katy Stephens saw her athletic career flash before her eyes.

In one terrifying moment two years ago in a recreational league volleyball tournament in Mount Pleasant, a teammate collided with Stephens' left leg while going after a ball.

Stephens crumpled to the court in pain, her mother, Meghan Baker Stephens, rushing to her side.

Katy Stephens, then a junior at Notre Dame High School, had torn the anterior cruciate ligament and meniscus in her left leg, which also happens to be her plant leg for jumping.

In the blink of an eye, her junior season of track and field, along with her senior seasons of volleyball and basketball, were gone.

A year after the extensive surgery to repair the ligament damage and three long years after she last competed in a track and field meet, Stephens is back and competing at the highest level possible.

More:What to watch for from Burlington-area athletes at the 2022 Drake Relays

Stephens, now a senior at Notre Dame, will compete in the high school girls high jump at 4:30 p.m. Thursday at the 112th Drake Relays at Drake Stadium in Des Moines.

For Stephens, it will be her first appearance on the famous blue oval since she anchored the West Burlington-Notre Dame girls 4x100-meter relay team to a seventh place finish in the state meet on May 18, 2019.

Qualifying for the Drake Relays is a highlight for any high school track and field athlete. For Stephens, it means all that much more.

“It’s super exciting," Stephens said. "I had a lot of expectations for myself, trying to keep it realistic at first. After not jumping since my freshman year, it’s been tough to gauge where I would be at. Already qualifying for Drake is. Huge accomplishment for me. I’m super excited to see where the rest of the season takes me. I’m just going to keep working hard, getting better.”

"I don't know if I've ever seen an athlete go through as much as what Katy has had to go through the last three years," West Burlington-Notre Dame girls track coach Mike Gurius said. "She had an outstanding freshman year, then she missed her sophomore year because of COVID, and then missed her junior year with the knee injury. So she basically lost two of her four track seasons.

"It's been quite a story with Katy," said West Burlington-Notre Dame boys track and field coach Corey Lamm, who coaches the jumpers for girls and boys. "She basically missed three seasons. She missed two track seasons, then missed volleyball and track this year with the knee injury. It's been a rough year for he. Her physical therapist did a great job with her getting her back and ready to compete this spring."

Stephens, who placed sixth in Class 3A in the high jump as a freshman, led Notre Dame to the Class 1A state championship in volleyball as a junior. She was named captain of the all-tournament team that season.

After a solid season in basketball, where she helped Notre Dame reach a Class 1A regional final for the second straight year, Stephens was all set for a breakthrough year in track.

Stephens decided to get in some extra work on her volleyball skills and went to Mount Pleasant for a little action in the recreational league.

Stephens got a little more than she bargained for.

“I was going out one day, just hoping to get in some extra reps and it turned into missing a year of my high school athletic career. But there’s not much you can do about it," Stephens said. I was hoping it wasn’t anything super serious. It hurt a lot and I could walk right away after it happened. I was trying to see the bright side of it and hoping for the best. I was doing whatever I could to hopefully make it heal faster. But I went to the doctor, got X-rays, MRIs, everything and waited to get those back. I found out it was pretty much the worst it could possibly be.”

Stephens' mother was on the court with her when it happened. She knew right away her daughter was in for a long, tough road ahead.

"It was heartbreaking seeing your daughter, who is going to be a senior, go through that," Baker Stephens said. "I was hoping for the best, but realistically I knew that was probably not going to happen. We started calling her coaches right away and letting them know. That was hard to do. It's so hard to see a senior go through that."

The long road to recovery

While the physical part of surgery and rehabilitation were painful to say the least, it was the mental aspect that was most trying for Stephens.

Watching her teammates compete in track meets last spring became painfully unbearable. Instead, Stephens had to cheer them on from afar while continuing the recovery process under the watchful eyes of physical therapists Theresa Brokaw and Kyle Peterson, both former athletes.

“It was very tough, very mentally challenging and exhausting. It was tough watching all of my teammates going out and doing what I hopes to do, also. It was exciting to see all their success, but really tough knowing that I should have been out there and been a part of that also. Now I think that is motivation for me to get back into it and really prove that I am still where I was an better," Stephens said. “It was very emotional for me. Last year I was only able to bring myself to go to one or two meets. It was just a super, super emotional time for me. I was still cheering on my teammates in spirit, but it was super emotional for me to be at the meets and to watch them. But I was till cheering them on every step of the way. Still working hard to get back to where I am now. I’m going to keep pushing. I’m never going to be content.”

Her physical therapists were blessings for us," Baker Stephens said. "They worked her hard. They were amazing. They pushed her hard and kept her spirits high. They were real godsends."

"After the injury she was pretty down on herself. She was really missing everything, especially going into her senior year," said Corey Stephens, Katy's father and interim head girls basketball coach at Notre Dame. "She is one of those girls who is going to do everything she can to get back to where she's at right now. Not playing volleyball or basketball left a big void there."

Stephens originally hoped to make it back for part of the volleyball season. When that wasn't possible, she became like another coach on the court, helping guide the Nikes to a second straight Class 1A state championship.

"Having Katy in the role as a player/coach in volleyball was a godsend," Baker Stephens said. "It was great of coaches (Mike) Davis and (Susan) Reid to allow her to step into that role as a mentor and a leader."

“Volleyball was also very emotional," Katy Stephens said. "Coming off that season high of winning state after going there for the first time and getting all-tournament team captain, not knowing that was going to be my last high school volleyball game ever. That was the hardest part. I felt like there was unfinished business still. That was tough. But it was good to be a part of the team still and cheering them on to another state championship.”

Basketball season washed out, too

Not wanting to risk her future by furthering injuring her knee with the constant strain of jumping, Stephens decided to sit out her senior season of basketball, as well.

Making the decision all that much more difficult was the fact that her father took over as interim head coach when Coach Jim Myers died in late November from cancer.

Plus, her younger sister, Taryn, was stepping into a bigger role on the basketball team.

Katy Stephens wanted to make sure her knee was 100 percent before returning to sports.

“Basketball was also tough, especially losing Coach Myers and having my Dad take over," Katy Stephens said. "It would have been really awesome to be able to play for my Dad, but it wasn’t worth risking another injury, especially since I knew I was looking at college for track or volleyball.”

"It was an emotional year to say the least," Corey Stephens said. "We will always be lft to wonder what she could have done."

More:Drake Relays return to Des Moines. What you need to know about tickets, parking, forecast

Stephens returned for her first track meet since her freshman year at the Dickinson Relays at the UNI-Dome in Cedar Falls. While she wasn't pleased with her performance, just getting back to high jumping was a victory in and of itself.

Then, a week later, Stephens had her breakthrough moment, clearing 5 feet, 5 inches at the Central College Indoor meet in Pella.

At long last, Katy Stephens was back.

“I was thinking that my career was over. I was afraid that everything I had worked for would just be down the drain," Stephens said of her thoughts right after the injury. "I wasn’t sure I would be able to compete at the same level that I was previously competing at. I always knew that I wanted to be a collegiate athlete and was working super hard towards that. It was right at the beginning of the recruiting process for me. It was really tough because some of the schools that had I had been talking to stopped talking to me. So I thought at this point it’s going to be over. There’s no way I can recover from this. But I worked hard for that year I was out, hoping to come back stronger this year. I’m just going to keep working. I’m not going to be content with a first-place finish. I’m always going to be pushing for new PRs and getting better every meet.”

For Gurius and Lamm, seeing Stephens back on the track was a sight to behold.

"She was running to 60 at Central and it popped in my head, 'Wow! This is the first time she has run since her freshman year," Gurius said. "Coming back and running and jumping so well this quickly is a true testament of her character. She's such a good kid and she has worked so hard to get back."

""It's amazing that she was able to come back so quick and perform at such a high level having not high jumped since her freshman year," Lamm said. "Nobody deserves to have a great season more than Katy."

Stephens learned some valuable lessons through it all. She will compete in the high jump and the 4x100-meter relay this weekend at the Drake Relays. On Monday, Stephens will sign a National Letter of Intent to compete in track and field at the college level.

"Going through the whole ACL recovery was definitely tough, mentally draining. But I got taught so many lessons," Stephens said. "Life is more than sports that you’ve grown up with, what you push yourself towards and set your goals for. It’s not always going to work out in your favor. You have to adapt and grow. I definitely feel like I grew as a person throughout the whole process.”