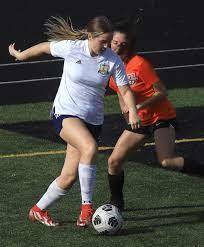 Amelia Schwenker to play at SCC

After having her sophomore season of soccer taken away because of the COVID-19 pandemic, Amelia Schwenker realized just how much she loved the game.

So much so that on Wednesday afternoon, the Notre Dame High School senior forward signed a National Letter of Intent to play soccer for Southeastern Community College, beginning this fall.

For Schwenker, who also runs track for the West Burlington-Notre Dame girls team, it really was quite a simple decision.

“At the beginning of last year I decided that I’ve spent a lot of time on soccer and I’ve gotten pretty good, so I knew that I wanted to continue to play in college," Schwenker said. "This season is going pretty well. Every season has been good. I just decided to play college soccer. I’m super excited. I’m super thankful for this opportunity and for my coaches who have supported me over the years.”

“It’s exciting times," Notre Dame-West Burlington/Danville girls soccer coach Todd Ackerman said. "Amelia comes in and she’s just a fast player who comes in and really picks up everybody. Now she’s a fast soccer player instead of just being a fast person out there.”

If there were any doubts, SCC's top-notch nursing program put those to rest. Schwenker already is a CNA and plans to work as a geriatrics nurse.

“SCC has a great nursing program," Schwenker said. "I’m super excited to be out there next year and the year after, working toward my degree in nursing. I'm a CNA right now. I’ve been building my experience in my field. I’m super excited to go into nursing.”

Schwenker is off to a hot start for the 6-3 Nikes. Heading into this weekend's Adidas Tournament of Champions at the Burlington Regional RecPlex, Schwenker has scored nine goals and assisted on six other for 24 points. She has 17 shots on goal.

In her three-year career thus far, Schwenker has scored 31 goals and assisted on 10 others for 72 points and has 75 shots on goal in 35 matches. The Nikes are 32-13 in her three years on the team.

Schwenker has managed to succeed while juggling her time between soccer and the track team, where she is a sprinter. She has managed to work as a CNA and keep a high grade-point average in the process.

“I go to track after school and then I go straight to soccer. It’s pretty much what it is every day. I’m used to it now. I have to do my schoolwork after practices. It gets pretty busy, but it’s manageable," Schwenker said. “It’s been pretty hard. I definitely struggled more as a freshman. I’ve been playing three seasons. I’m kind of experienced in it. I’m pretty good at my time management now. I just have to make sure I am getting properly rested so I can play to the best of my abilities.”

Schwenker will join an SCC women's soccer team which is continuing to build. The Blackhawks were 9-9 last season, including 5-5 in the Iowa Community College Athletic Conference. SCC has a new coach this season in Kelee Marcy.

Schwenker is looking forward to stepping up to the next level in the sport she loves.

“This year I knew that I was going to play college soccer, so I decided I was going to focus my time on soccer rather than track. That’s what is going to benefit me the most," Schwenker said. “I just have to keep working hard. Over the last season I had to step up, knowing that I’m going to college to play soccer for SCC. I’ll just be trying to maintain my skills.”

“She’s played a couple different positions for us," Ackerman said. "She scores a lot of goals. I think she’s on track to have her best year yet. She’s playing a little bit more for us now, which is great. I think she’s going to do well at that next level and continue to develop. It’s exciting times for her and her family. It’s a great choice for her. And it’s exciting times for the program. Another one going off to college. I’m looking forward to it.