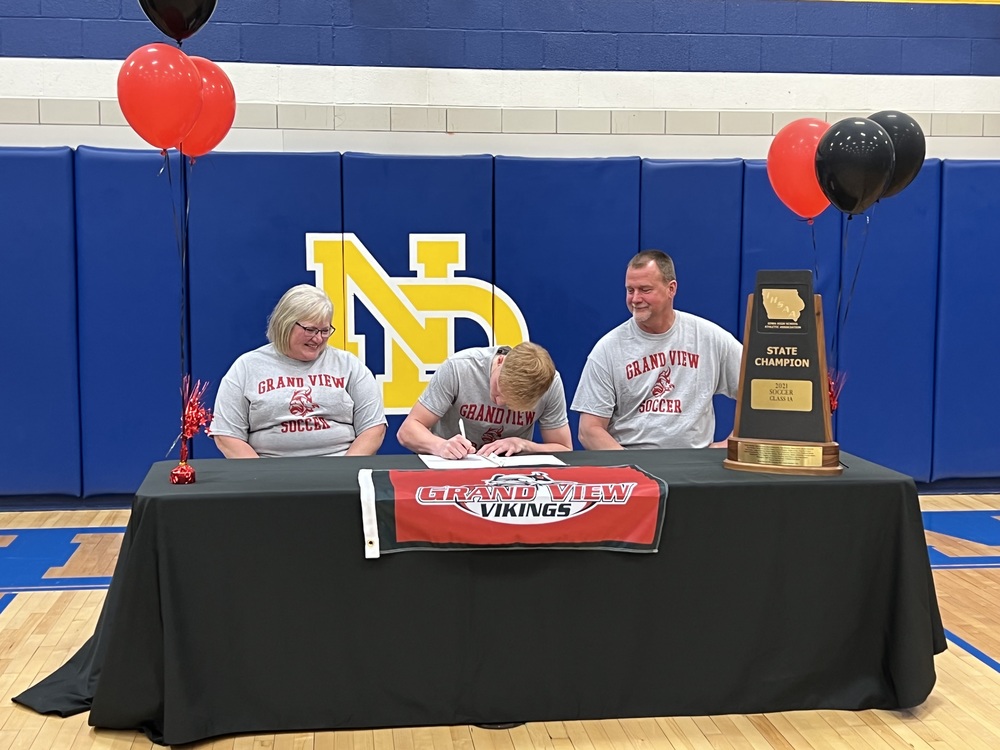 Senior forward Cole Ward has played a key role in the Nikes' success over that span.

Ward isn't flashy or fancy. But no one outworks Ward, who has proven to be almost unstoppable with the ball at his feet.

Ward, who was named captain of the all-tournament team at state last year, will take that grit and determination with him to Grand View University in Des Moines this fall.

Ward, who plans to major in biochemistry and eventually get into pharmacy school, signed Monday at play soccer for the Vikings, an NAIA powerhouse.

Ward becomes one of the first players first-year coach David Graves has added to the roster for next year.

Ward is looking forward to the challenge.

“I decided Grand View because I feel like it’s the best option for my soccer career and getting better. It’s going to be a very competitive squad, so that will help me get better as a player. It’s where I want to be," Ward said. “Hopefully I can come in as a hard worker and help them get better and get better alongside them. Hopefully after a while I can play on their first team.”

“It’s exciting. This is really cool. He is the second one that is going to be going from Notre Dame. We’ve got five more this week, so that’s cool," ND-WB boys soccer coach John Wagner said. “He is not somebody you want to go against when he is going full speed. He’s not afraid of contact. He comes in and works his butt off. If there is a 50-50 ball, Cole is going to be involved in that. I think we’re going to see some good things coming forward from him as we progress in substate and hopefully get to the state tournament.”

Ward has scored 43 goals and assisted on 18 others in his 46 matches with the Nikes. That includes 14 goals and two assists this season. The Nikes are 10-3 and ranked third in Class 1A heading into the SEI Superconference Tournament Friday and Saturday.

Ward, who came up through the Southeast Soccer Academy, thought his senior season may have been finished before it started. He suffered a torn hamstring playing in the Monster Mash Tournament last fall and pushed it to get back for basketball season.

With the cold spring, Ward has had trouble keeping the hamstring loose. He is hoping the current warm spell will be to his benefit.

“When I tore my hamstring I was really worried that I wouldn’t be the same. I was honestly worried I wasn’t going to have a senior season. Coming back from that and being able to do what I do and love is great," Ward said. “It was about three months. I rushed it a little bit to get to play basketball. I had a lot of good people helping me through it.

“He’s a big-time, big-game player," Wagner said. "He was MVP in the state tournament. He’s got 43 goals so far in his career. We’ve got some ability to get some more. He’s probably going to get very close to the 60-goal range this year. He’s also somebody who shows up and does all the right things. That’s probably the biggest things about him.”

Ward will join a Grand View team which went 11-6-1 last season, including 7-3-1 in the Heart of America Conference.

Ward is the second of six ND-WB senior soccer players expected to sign to play in college.

“Notre Dame has taught me everything from smarts to being a good person and having good character. I think that is really going to help me in the future with everything I do," Ward said. “I’ve been playing soccer since kindergarten. I joined SESA in about third grade and I’ve been playing ever since. They’ve helped me get to where I am today. I wouldn’t be here if it weren’t for all my coaches. I’m very thankful for them.”

“It says a lot about these kids. They are really good kids and they’re doing good things," Wagner said. "I am really proud of him. He’s going to do very well there. He’s a good student. He’s going to work hard. He’s going to a really good soccer program, so he understands he’s going to have to work hard to get the time he needs. But that has never been a problem for him. I have nothing but confidence that he is going to be playing for them in the future.”