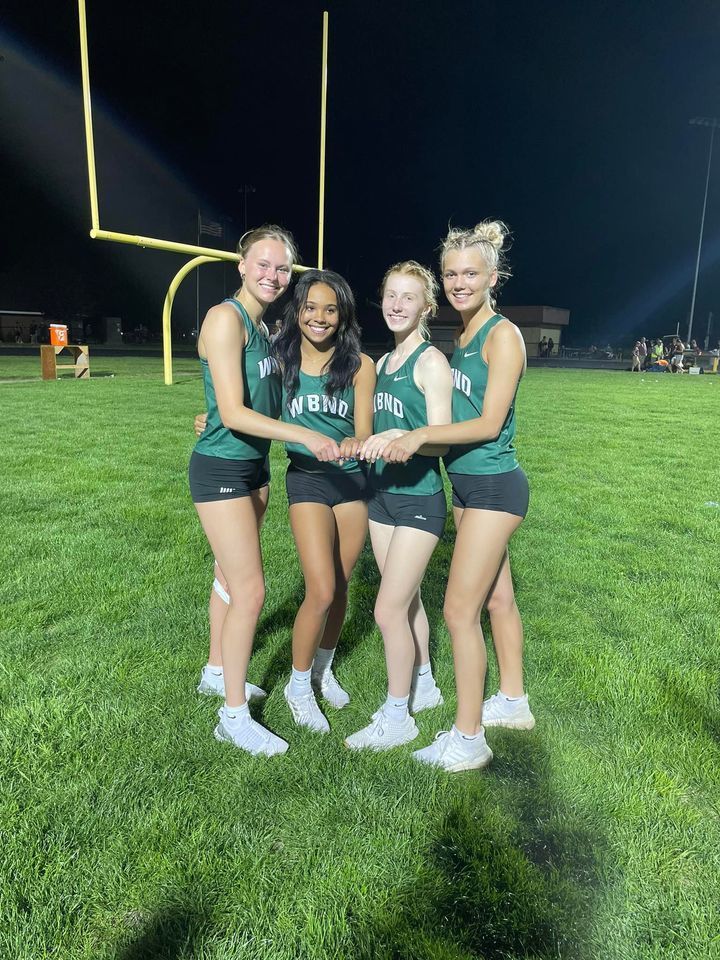 MOUNT PLEASANT — Up until early this week, Josie Bentz was convinced her high school track and field career was over.

After sitting out the last three weeks with a severely sprained ankle suffered last month at the Pen City Relays in Fort Madison, Bentz only Monday got cleared to compete again.

Still, the Notre Dame High School senior had some trepidation about high jumping on her tender ankle.

That is until teammate Katy Stephens convinced her to give it one more shot.

So at Thursday's Class 3A state qualifying meet at the Mapleleaf Athletic Complex, Bentz pushed through the pain and somehow managed to clear the bar at five feet despite using a radically-altered approach.

While Bentz didn't grab one of the two automatic spots for next week's state meet at Drake Stadium in Des Moines, she gave herself a chance, and one last memory of high school track and field.

“It was a little bit different, but I’m happy I got to go out at least one more time and hopefully another. Who knows? I did my best and I think that was good. And I got to jump with Katy another time," Bentz said. “The curve was not happening for me. It kind of hurt the inside. So let’s just go straight, but go diagonal to give myself a little bit of a curve.”

Bentz and Stephens traded roles this season. Last year, it was Bentz who helped Stephens get through a serious knee injury.

The last three weeks, Stephens has been giving Bentz all the encouragement she needs.

“Katy kept telling me, ‘I think you’re going to surprise yourself with how high you’re going to jump.’ I definitely did. I wasn’t expecting that," Bentz said. “It’s difficult, but Katy gets where I’m coming from because she had it last year. Obviously mine wasn’t anywhere near as bad, but I think we kind of helped each other through it. It was really good having someone who has been through it. She can kind of talk to me about to get through it. She’s told me the other day, because I was questioning if I should even jump, she said, ‘Just do it. It could be your last time jumping in high school.’ I did it because I wanted to do it one more time with her.”

While Bentz was busy pushing through the pain, Mount Pleasant senior Jadan Brumbaugh was busy smashing down barriers.

Brumbaugh, the defending Class 3A state champion in the shot put, easily won that event with a heave of 48-4 1/4.

But it was Brumbaugh's win in the discus which was most stunning. Brumbaugh throw of 134-1 shattered her personal best by an eye-popping 15 feet and broke the school record, previously held by Mary Wester, by nearly two feet. Her throw sailed over the heads of two officials marking the throws, sending them scurrying for safety.

Brumbaugh positioned herself to chase a pair of state titles next week.

“That's crazy to have both the records. I am amazed and proud of myself," Brumbaugh said. “The shot I’m excited about staying consistent up around 49. I’m very proud of myself for throwing a 15-foot PR in the discus. I’m proud to break the record. Both of them are amazing. I’m very excited.”

West Burlington-Notre Dame senior Maisey Belger punched her ticket to state in the discus, taking second with a toss of 107-6.

“I’m happy I made it. I wanted to do better. I always have to strive to do better. I’ll work on stuff in practice and hopefully figure some stuff out before state," Belger said. “I was trying to get the last big throw of the night. It didn’t happen, but it’s okay because I made it. I just have to be happy about it.”

Fort Madison senior Tate Johnson was involved in three of the closest races of the night.

Johnson trailed West Burlington-Notre Dame junior Jack Riley for the first 80 meters of the 100-meter dash, but came back to clip Riley by .03 at the finish, winning in 11.38 seconds.

“I just get tunnel vision during the whole race and just look at the finish line," Johnson said. “I didn’t get the best start. I started off a little ways backbit them my top speed came in and I got first at the end. It was a pretty exciting race. I’m ready for state.”

“Coming in I knew we were about the same speed. I just had to focus on pushing back on my blocks. Pushing out hard and staying relaxed and fast," Riley said. “That’s what I was looking for today. Just get first or second and compete with Tate. All year he’s beaten me. Last week I beat (Wapello’s Jake) Gustison who had beaten me all year. I was looking to beat (Johnson) today, too. I came pretty close.”

Johnson came back later to anchor the Bloodhounds to victories in the 4x200 and 4x100 relays.

Fort Madison got off on the right foot when Mikey DiPrima set a personal-best of 6-1 to win the high jump.

“It was a shock to me going into it in the first place. I’m just glad that I made it and see if I can do better at state," DiPrima said. “I knew I had competition with Washington and they gave me all they had. I’m pretty proud of myself today.”